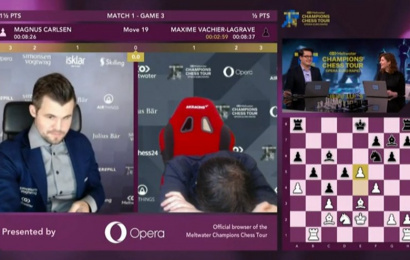 Magnus Carlsen could afford to miss mate-in-2 and still beat
Maxime Vachier-Lagrave in three games after what he called “a day of very good
chess”. It was a big improvement for the World Champion, who felt he began the
semi-final with a model game. Wesley So and Teimour Radjabov, meanwhile, defied
all expectations by trading blows for the first three games before Wesley
managed to hold a draw in the 4th and take the lead in the match. We’re
currently on course for a repeat of the Skilling Open final.

You can replay all the knockout games from the Opera Euro
Rapid, the 3rd event on the $1.5 million Champions Chess Tour, using the
selector below.

And here’s the day’s live commentary from Peter Leko, Tania
Sachdev and Sethuraman.

And from David Howell, Jovanka Houska and Kaja Snare.

Get 40% off any chess24 Premium membership using the voucher code CCT40!

There was no slowing down in the semi-finals, with five of
the day’s seven games decisive:

There was a big question mark over what kind of form Magnus
Carlsen would be in after some gut-wrenching moments in his quarterfinal
victory over Daniil Dubov, but the first game of the day couldn’t have gone better
for the World Champion. Maxime Vachier-Lagrave persisted with the Grünfeld
Defence he tends to play against Magnus and seemed to get a completely
innocuous position out of the opening. A few moves later, however, and it had
all gone horribly wrong, until 29…Nb8? was simply a losing move.

Both sides have an equal number of pawns and the same minor
pieces, except all of White’s army is better placed. 30.Nd5+!, attacking two
undefended pawns and the king, forced 30…Bxd5 31.exd5 and only now, much too
late, did Maxime take his first long think of the day. Peter had all the time
in the world to draw arrows illustrating how completely the white bishop would
dominate the black knight.

I certainly didn’t play my best, but Magnus was very close
to his best. In the first game I underestimated my issues and played
carelessly.

The king is simply headed to capture the f5-pawn, and if the
black knight tries to move it’ll be immediately eliminated. “I managed to win a
model game in the first one” was Magnus’ summary, and it was hard to disagree.

Game 2, however, was a reminder of how quickly things can go
wrong in chess. The opening was uncomfortable for Magnus…

…and then it seemed from his reaction that he was in deep
trouble when 37.Rd1 appeared on the board.

Positionally Black was close to busted, but it turned out
there was a solution – 37…Bxb4! 38.Nxb4 Rc5! and suddenly Magnus was ok, then even better when Maxime responded quickly and poorly. “I missed some things but
fortunately it was not too bad”, was how the World Champion summed up the
incident afterwards.

Magnus reached an endgame a full exchange up, but was unable
to convert as Maxime held a 72-move draw.

The third game saw Maxime persist with the Grünfeld, and in
fact the same line that featured in Carlsen’s Tata Steel Masters last-round win just a couple of weeks ago.

In the third game it was definitely a conscious decision. I
thought we’d more or less get out of theory and just get a queenless
middlegame, which I thought would suit me fairly well.

For most of the game things went like a dream for White.

Here Magnus gave up the exchange with 24.Rxc6! and was later
asked by David Howell whether that had been courageous:

No! Not that kind of sacrifice. I feel like that’s one of
the least courageous sacrifices I have ever made. Basically yes, I do lose a
rook for a bishop, but I have a strong pawn for it and the bishop pair as well
as wonderful centralisation, so it’s clear that I’m not running any risk other
than accidental blunders.

One mistake was all it took for Black’s position to go from
bad to lost, and Magnus pounced with the pawn break 32.e6! It seemed he had it
all worked out, but in fact he’d missed the clincher in the position after 33…Kh8:

34.Rc8! leaves black defenceless against the threat of
35.Bd4 mate next move, or rather all the defences just give up so much material
that it’s the equivalent of resigning. Magnus, however, blitzed out 34.Bd4+, a
line he revealed he’d only gone for because he’d missed that after 34…Rxd4
35.cxd4 Bxd4 36.Bf5 Black could play 36…Ra7.

He spotted the missed mating idea just too late:

You’re not really supposed to miss mate-in-2s I think, at
this level, so that was really crazy! … It’s very typical. I feel like there
should be something in the position and then I realise it right after I made my
move. I see how I could have won and at that point I thought this game was
going to be a draw and I still have a difficult task in the last game, but
fortunately it all came apart for him at the end. Still, it was never a very
easy draw, but I guess one that he should generally make.

Magnus did well to keep things together until finally
catching Maxime with 49.Rd8+!

Maxime felt it was a deserved victory for his opponent but
will still have a chance to come back: “I will have to play better, and if I
manage to put Magnus under pressure then anything can happen”.

Almost everyone had predicted a lot of draws in this match,
but instead it started with three decisive games in a row. Teimour was happy
with his play overall but said he was, “sometimes maybe a bit over-pushing,
tired of making a lot of draws, but that also makes it very exciting for the
spectators”. Wesley also chimed in by saying, “If they decided to change chess
so a draw is not a result, I’m all-in for that!”

The first game was a 3.Bb5 Sicilian where Teimour missed the
chance to get counterplay and came under a fierce attack on the kingside.
Wesley played brilliantly, but the final attack could have been parried.

Teimour needed to hit back, and he did immediately, using a
line of the Queen’s Gambit Declined that he’d previously played with the black
pieces. It worked to perfection as White ultimately got an extra pawn in a rook
ending, but just after our commentators explained that the game might last
forever Wesley crumbled almost immediately and the scores were level.

The mini-match turned on the 3rd game, where Teimour
Radjabov regretted his choices. “I just decided maybe Wesley’s not in a great
mood so I can play on”, he said of his decision not to go for liquidation with
a4 as he had in
a very similar position against Alexander Grischuk in the prelims. Shortly
afterwards Wesley had begun to take over, but the bishop sacrifice Teimour
decided on was a case of the cure being worse than the disease.

As we saw in the quarterfinals against Jan-Krzysztof Duda,
there’s no-one in world chess better at refuting unsound attacks than Wesley
So, and that’s just what he did as he went on to claim the full point.

Teimour had to win on demand in Game 4 to tie the match, but
when he failed to grab a pawn on move 15 Wesley was able to consolidate and
draw with some ease.

That means Teimour must now win Friday’s rapid match to
force a playoff, or the Meltwater Champions Chess Tour leader will be out.
Maxime will also be out to upset the World Champion – he needs to look no
further than Daniil Dubov in the quarterfinals to show how that can be done
despite getting outplayed on Day 1.

Related Articles For Your Interest